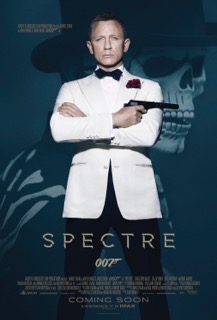 
The producers of the James Bond movies made a much needed course correction in 2006. The series was rebooted, the character sent back to the start, with Bond not yet licensed to kill. There were no fancy gadgets and no megalomaniacal villains. Casino Royale was gritty, if a Bond movie could actually be called gritty. This Bond could bleed. He could possibly die. He could actually love and show feelings. And Daniel Craig, the sixth actor to play Bond, looked as if he’d rather throw a punch than make a quip.   Casino Royale is arguably the best movie in the history of the Bond franchise. The next, Quantum of Solace, is a bit of a letdown, still it keeps in place what appears to be the franchise’s new formula. Tight editing and pacing. Fantastic visuals and more grounded fight scenes. Daniels Craig’s just as intense, but there’s no romance with the requisite Bond girl because both Bond and the woman have more important things to do. Sure the story’s a bit muddled, but then again, most Bond stories tend to be a bit muddled.   There are many who claim that Skyfall, the next of the series, is the best of them all. And that’s understandable. There’s a charismatic villain. A plot centered on revenge. The visuals, under acclaimed director Sam Mendes, are perhaps the best ever and include a stunning nighttime fight sequence seemingly lit only in silhouette by the light of skyscrapers. Yet the film drags mightily in the last 30 minutes or so, and the plot is not only muddled, but convoluted with logic apparently tossed out the window. Still, Craig is fantastic as always, the opening pre-credit scene is superb, and it ends with a punch to the gut resulting from the death of Judi Dench’s “M”.   Now comes Spectre, the fourth and possibly finally film in the franchise for Craig, who is teamed once again with Mendes. Spectre is undoubtedly the worst film of Craig’s tenure, which means that it’s still better than all of the Roger Moore films, three of the Pierce Brosnan films, and most of the Sean Connery films.   But the disappointment is relative. It’s a Bond movie. With Daniel Craig. There’s a great pre-credit sequence, maybe the best of the entire series. The visuals are stupendous. The scenery gorgeous. The evil bad guy’s played by Christoph Waltz, one of the most charming, charismatic actors ever to grace the Bond franchise. Oh, and for the first time since Diamonds Are Forever, way back when Connery was quitting the series for a second time, Bond’s fighting SPECTRE.  The problem with this Bond movie is that the whole isn’t as good as the parts. The set pieces are marvelous (particularly the opening scene in Mexico City and a water sequence on a Austrian lake in winter). There’s a weariness to Craig, and to his portrayal of Bond — undoubtedly born from the time and effort involved in making a Bond film — but it works for a Bond who appears tired of the cat-and-mouse chases and bureaucratic mazes of MI-6. And Waltz is excellent as Blofeld, the only problem being that he gets so little screen time, and so little to do with that limited screen time.  Waltz’ limited screen time is puzzling considering just how bloated the rest of the movie is: bloated with secondary characters; bloated with subplots that would have been better served by being the subject of an entire Bond movie; bloated with set pieces that are set pieces because the best option for filling a hole in the plot is an extended action sequence. But the primary problem with the movie, the primary reason the movie doesn’t work and is bloated is simple. It goes back to Casino Royale and the rebooting of the Bond franchise. Bond’s a gritty fighter on Her Majesty’s Secret Service who does what he does not for God and Country, but for revenge. He’s revenging Vesper Lynd. He’s revenging M. He’s revenging the guy who killed Vesper.  Every Daniel Craig Bond movie ties into every other Daniel Craig Bond movie. The brooding Bond must be explored and explained. So each movie becomes about serving an ever-expanding backstory for a character who, before the reboot, really didn't have a backstory.   Thus in Spectre, the filmmakers attempt to tie up the plots of all of the Craig Bond movies with a pretty bow that’s not needed because James Bond is just supposed to be a spy with a license to kill, not a killer revenging his past who just happens to be a spy. And especially not when the entire Bond series is retconned so that Blofeld’s turned into a wronged child bent not on world domination, but is instead, himself, concerned only with revenging a past wrong visited upon by an unwitting Bond as a child.   Still, for its faults, this Bond movie mesmerizes with stunning visuals and call backs to previous films in the Bond franchise — primarily You Only Live Twice, From Russia With Love, and On Her Majesty’s Secret Service. The cast is uniformly good. Daniel Craig goes down as the best Bond in the series’ history, and the scenes between he and Naomi Harris’ Moneypenny sparkle with a joy and wit that’ll be hard to replicate when Bond’s recast. One only wishes that, if the rumors are true and this is Craig’s last film as Bond, he could have gone out with a film befitting all that he has done to revitalize the character and the franchise.   Spectre disappoints, but only because the other Bond films starring Daniel Craig are so much better. It’s still better than most of the rest of the films in the franchise, but one just wishes those behind the film would dial it back, go back toward Casino Royale and simplicity. The guy’s got a license to kill. There’s no other explanation needed for why he does what he does.